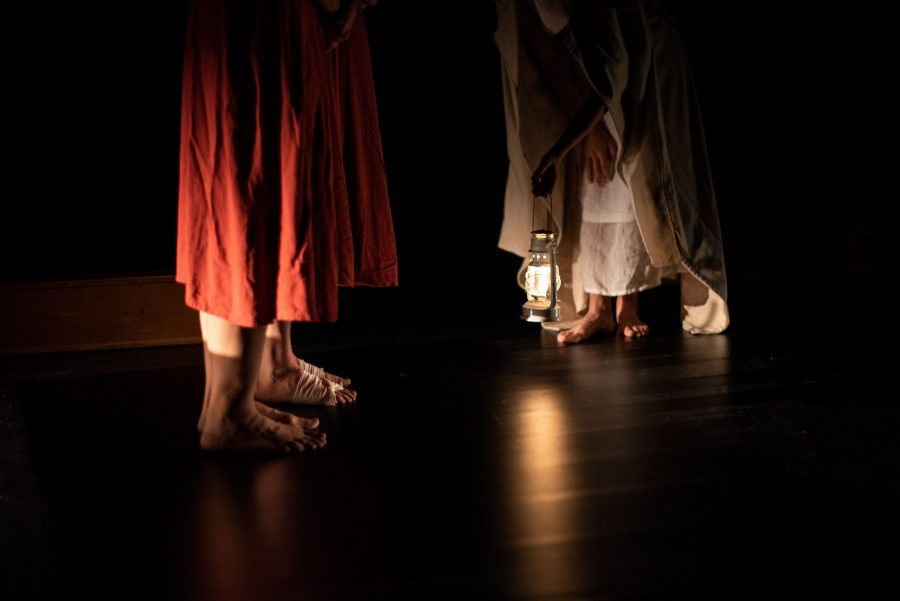 Cultivating an ethos of ensemble work, Teatr ZAR develops productions through a long process of creating its own theatrical language, which draws on music from numerous traditions found in the East and West. The company is a multinational group that was formed during annual research expeditions to Georgia between 1999 and 2003. During these expeditions, they collected a wealth of musical material, including a core of centuries-old polyphonic songs that have their roots in the beginning of the human era and are probably the oldest forms of polyphony in the world. Zar is a name of funeral songs performed by the Svaneti tribe who inhabit the high regions of the Caucasus in north-west Georgia. Teatr ZAR attempts to demonstrate that theatre does not only relate to thea (Greek ‘seeing’), but it is something that above all should be heard.

ZAR brings back theatre as it was before art ruptured into different disciplines and styles. Its work addresses themes that, in the contemporary world, seem to be reserved only for the religious domain. It comes from conviction, influenced by Polish Romantic ideas, that art is not only complementary to religion but can fill the dynamic chasm between the everyday and transcendent life. Juliusz Osterwa, one of the greatest figures of 20th-century Polish theatre who tried to put these ideas into practice – and one whose ideas had a great impact on Jerzy Grotowski – once wrote: ‘God created theatre for those for whom the church does not suffice.’

The Gospels of Childhood triptych is a culmination of more than 10 years of work with ancient sacred songs. The triptych consists of three performances, played also separately: Overture, Caesarean Section: Essays on Suicide and Anhelli: The Calling. In 2009, the triptych premiered in London at the Barbican Centre and then was presented in Los Angeles, Wrocław, Florence, San Francisco, Chicago, Sibiu, Legnica, Szczecin and Bydgoszcz. Parts of the work were staged, among others, in Athens, Edinburgh, Madrid, Belgrade, Budapest, Paris, Cairo, Seoul, New Delhi, Boston. The triptych was named Best New Music Theatre by The Los Angeles Times in 2009, and won the Wrocław Theatre Prize in October 2010. The second part of the triptych, Caesarean Section, was shown as part of the Fringe Festival in Edinburgh in August 2012, earning Teatr ZAR a prestigious Total Theatre Award for Physical/Visual Theatre and a Herald Angel Award.

In 2011, the company started work on Armine, Sister, a project dedicated to the history and culture of the Armenian people and to the Armenian genocide. Teatr ZAR’s performance Armine, Sister premiered on 28 November 2013 at the Na Grobli Studio of the Grotowski Institute in Wrocław. Since then, apart from Wrocław, it has been staged in Warsaw, London, Oslo, Rome, Paris, Szczecin, Sibiu, Florence and San Francisco.